We are back with another blog about all things electricity and electrician-related! Over the past several months, we’ve been focusing most of our energy on discussing HVAC repair, maintenance, installation, and other related subjects.

But, after all, our name is ElectricMasters, so we feel the need to get back to our bread-and-butter service. That said, today’s blog is all about offering up some interesting, random, entertaining, and perhaps even some practically useful facts regarding electricity and electricians. Usually, we’ll hone in on the “practical” side of things, with blogs about HVAC maintenance tips for your 2019 spring cleaning, why regular HVAC maintenance in Cincinnati is crucial, or even a few signs you need a new electrician.

So, in the spirit of variety, we are going to shift gears a little bit in today’s blog! Before we dive into the meat and potatoes of listing of the aforementioned fun facts, however, allow us a few moments to describe who we are and what we do at ElectricMasters of Cincinnati.

We are a Cincinnati licensed electricians that specialize in all of your electrical needs, both home and business electrical. We’ve got 20 years of experience in the Tri-State area, providing residential, commercial, and new construction electrical services. We are also known for our availability, as we are the top Cincinnati emergency electricians. If you need to talk to an electrician immediately, stop reading this blog and give us a call — immediately!

We are also HVAC specialists, although we wouldn’t hold it against you if you didn’t deduce that from our name (ElectricMasters, in case you’ve forgotten in the last 30 seconds). If you are in need of trustworthy, affordable HVAC services in Cincinnati, we offer commercial and residential heating and cooling repair, installations, and maintenance plans. HVAC maintenance is highly advisable for a wide variety of reasons. To learn more about what we offer and what your home or business stands to gain, check out our dedicated resource on HVAC services in Cincinnati! 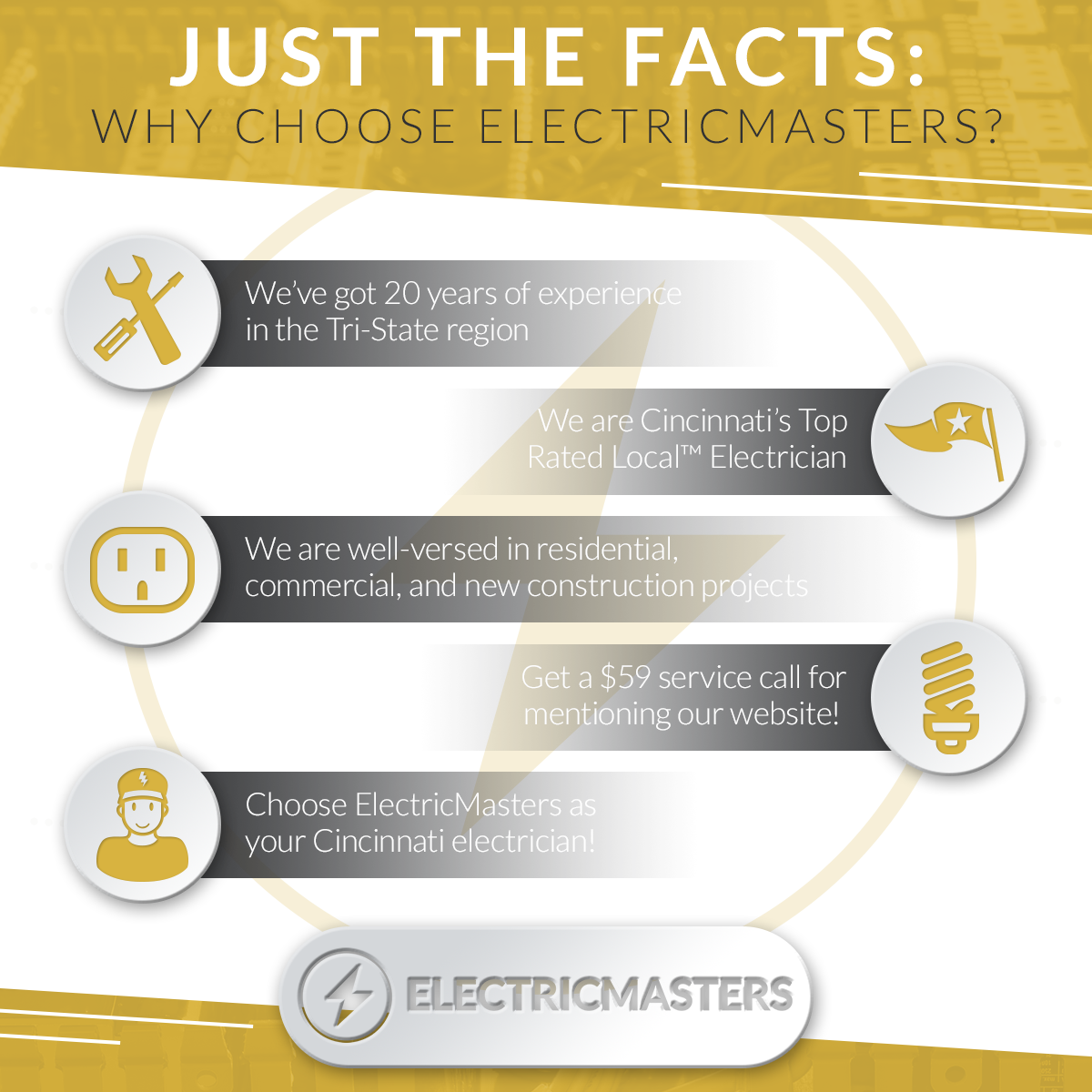 Now that we’ve gotten some of the formalities out of the way, it’s time to dive into the meat and potatoes of said facts!

Whether you need electric services related to residential, commercial, industrial, or new construction sites, we’ve got you covered at ElectricMasters. We’ve been in this business for a long time, which gives us the experience that counts when diagnosing and repairing electrical problems. Give us a call today!